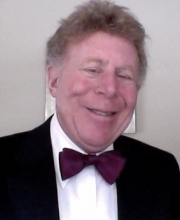 Terry R. Bard, D.D. is a teacher, clinical psychologist, ethicist, researcher, and rabbi. Dr. Bard has been a member of Harvard Medical School Department of Psychiatry Medical since 1976. He has served as a Senior Fellow of the Oliver Wendell Holmes Society at Harvard Medical School and as initial creator and Director of a newly conceived Translational Medicine Clerkship in the combined Health Sciences and Technology (HST) collaborative between Harvard Medical School and Massachusetts Institute of Technology. Dr. Bard has taught in the Harvard Medical School patient-doctor III program for over two decades and has provided mentorship and counsel to medical students, residents, fellows, and faculty for many years. He is the Managing Editor of the Journal of Pastoral Care Publications, Inc., publisher of books, monographs, and the longest extant professional pastoral care journal since 1946. He is co-founder, co-director and Vice President of the American Bioethics & Culture Institute, the American Unit of the International Network of the UNESCO Chair [Haifa] in Bioethics, Inc., a budding institute that incorporates psychological insights into the ethics of decision-making under conditions of uncertainty. In addition to his private counseling and psychotherapy practice, Dr. Bard is principal of Biotechnology Ethics Service: Research & Responsibility (BESRR) Consulting. Dr. Bard retired from the Beth Israel Deaconess Medical Center (2008) where he had directed the Department of Pastoral Care and Education from 1984 while continuing a similar directorship at Massachusetts Mental Health Center until 1996. After 30 years in the pulpit, Dr. Bard was named Rabbi Emeritus of Congregation Shalom, Chelmsford, MA in 1996. He created the first clinical ethics program at Beth Israel Hospital and has helped to create over 30 ethics programs at hospitals and other settings in the United States and abroad. Dr. Bard initiated and directed the Research Subject Safety Office at the General Clinical Research Center (NIH) at BIDMC. He continues to serve on many IRBs and DSMBs. He also served two terms as a Board member of the Massachusetts Society of Medical Research, Inc. These activities represent his ongoing interest in research and ethics. Dr. Bard continues to publish extensively, conducts, oversees and mentors research projects, and lectures internationally in the areas of medical ethics and safety, religion and health, writing and publishing, and the conduct of human research.